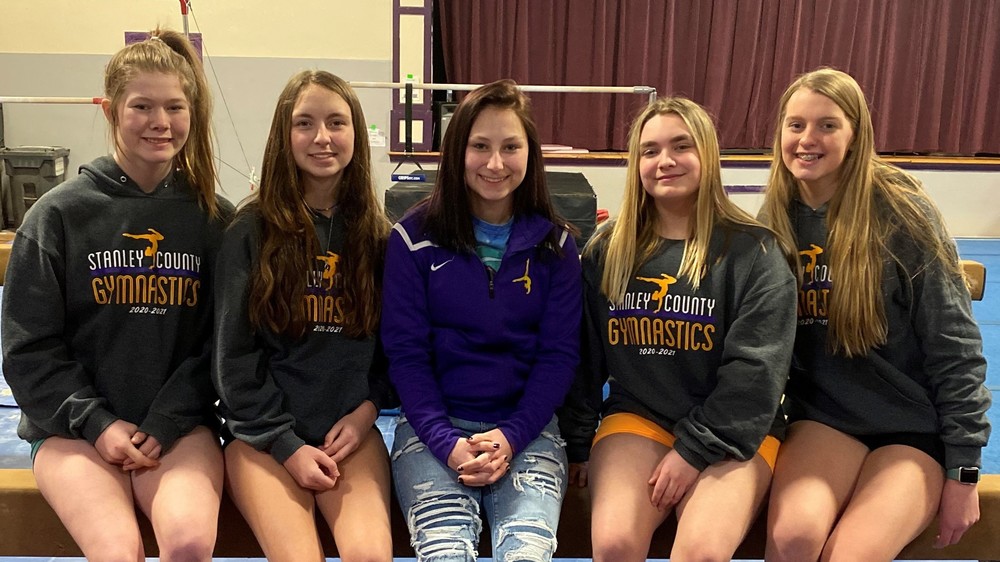 Congratulations to the “fabulous five” members of our gymnastics team earning a spot at the 2021 South Dakota State Gymnastics competition.  Allison Schlomer, Caycee Knight, Sumar Petersen, Keeley Rothschadl, and Aleeyah Schilling (pictured left to right) all qualified for the State A Gymnastics meet to be held on Friday, February 12, 2021. All five girls will be competing in the individual competition.

According to coach Christy Schilling, “Despite multiple setbacks this year, our entire gymnastics team had a fantastic season. This young team has gained so much confidence in themselves and their teammates over the past seasons. All team members stepped up to fill in this year when others were unable to compete.  The team’s goal was to qualify for the state competition.  Sophomores Aleeyah Schilling and Keeley Rothschadl and freshman Allison Schlomer have worked hard to improve their routines and scores. They all earned a spot to compete in the floor competition. Junior Sumar Petersen joined the team in early January and was able to earn her spot competing on both bars and floor. Eighth grader Caycee Knight, also competing on bars, was out for most of the season due to an injury, but she did not let that slow her down once she was able to get back onto the equipment after Christmas”.

Stanley County will compete during Pod 1 of the State A gymnastics meet on Friday, February 12, with a start time of 11:05 am.  Good luck to our fabulous five!